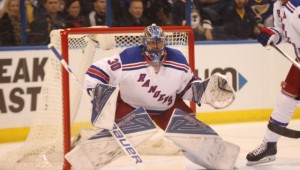 Chris Kreider scored the tie-breaking goal in the third period to lead the New York Rangers to a 2-1 victory over the St. Louis Blues at Scottrade Center on Thursday.

Henrik Lundqvist became the Rangers’ all-time saves leader and first goalie in NHL history to record 30 wins in 10 of his first 11 seasons.

Lundqvist made 35 saves including a stop on a Scottie Upshall breakaway moments before the Rangers scored the go-ahead goal.

The Blues (35-19-9) lost their second straight and center Jori Lehtera in the first period after he was hit in the face with an inadvertent puck.  St. Louis  got a goal from Troy Brouwer. Jake Allen made 21 saves in his first start since Jan. 8.