A state budget leader says it might be time to do away with the entity that controls the NFL stadium in St. Louis. 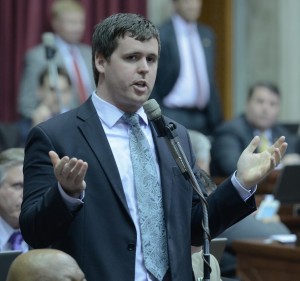 Vice Chairman of the House Budget Committee Scott Fitzpatrick (R-Shell Knob) says many questions remain after the St. Louis Regional Sports Authority (RSA) met with it last week. He says many of those are about whether money spent on lawyers and other parts of the stadium project was excessive.

“Some of those expenses were probably necessary if they were going to pursue and have any success at all at getting a stadium here, but a lot of them were not necessary and were frivolous and probably didn’t follow strict purchasing guidelines,” said Fitzpatrick.

The RSA spent 16-million dollars in the failed effort to keep the Rams in St. Louis. It told the Budget Committee last week it has spent nearly all of the money available to it.

Fitzpatrick says it might be time to liquidate the Authority, which was created by state statute.

“Use the proceeds to retire [some of the debt on the stadium], put the property back into private hands. Maybe that’s a good idea, maybe it’s a bad idea, but it’s something I think we should explore because for the next several years we’re going to be paying $12-million a year for something that is providing no return on investment to the state, or the city, or the county.”

Fitzpatrick says some of the questions raised in that hearing aren’t only related to the RSA.

“You can look at all these other off-budget, quasi-governmental agencies that are created in statute but aren’t subject to the same levels of oversight and scrutiny as typical state departments are … if they’re not following the bidding rules, and this is an entity that had $20-million or $17-million in the bank that apparently the feel like they can spend without following any purchasing guidelines, that to me shows a flaw in the system that is not just listed to the stadium deal, but that … it’s a problem probably across a lot of these types of entities.”

A state House budget subcommittee recently voted not to make a 12-million dollar payment on maintenance and repair of the NFL stadium in St. Louis. After the RSA’s meeting with the full budget committee, Fitzpatrick says that might be rethought.

“So long as the threat of them extending … refinancing bonds … under the current appropriation, as long as they’re not going to do that, then we probably need to make the payment,” said Fitzpatrick.

He noted that if the payment isn’t made, the RSA would default on the bonds and the RSA’s asset would probably be liquidated.

“I do think we need to look at what’s the best use of that asset,” said Fitzpatrick.