The state House has given initial approval to a bill to force the sale of 4,200 acres of land in southern Missouri’s Oregon County that is slated to be a state park. The Senate is working on its own version of that bill. 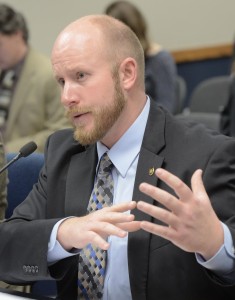 The land was purchased by the state Department of Natural Resources with $11-million from settlements with lead mining companies. Proponents of the bills say that’s not what the money was for, and say they weren’t told about the purchases beforehand and local officials were left out of the process too.

“This money was intended to go towards abatement, remediation, drinking water projects,” said Ross, who aimed his criticism at Governor Jay Nixon. “It is not intended to be the governor’s personal slush fund to buy property throughout our state as he chooses.”

The bill has bipartisan support in the House, but some Democrats like Tracy McCreery (St. Louis) say the Department was alright to make that land purchase.

“I think long after all of us are in the ground people are going to look back on this time and be glad that we’ve preserved a beautiful area in Oregon County for people to enjoy,” said McCreery.

Representative Kevin Engler (R-Farmington) said there’s a problem with the plan to sell that land.

Another vote sends the House proposal to the Senate.