A state House budget subcommittee has voted to pull $12-million out of the state budget for maintenance and debt on the NFL Stadium in St. Louis. 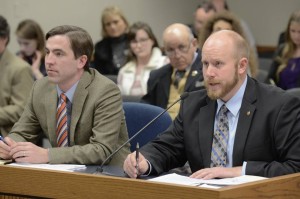 Republicans on that committee including its chairman, Representative Robert Ross (R-Yukon), criticized Governor Jay Nixon (D) for trying to use that money in the effort to build a new stadium.

“Many of you will recall the issue we’ve had going on of whether the governor was going to go out and spend this $12-million towards a new stadium, not the Edward Jones Dome … I’ve heard some discussion that we might now be looking at a soccer stadium,” said Ross. “Each of those attempts were wrong.”

Representative Jay Barnes (R-Jefferson City) said another reason for removing that payment is the governor used last year’s payment to say the legislature supported his effort to use taxpayer dollars on a new stadium – which many legislators did not support.

“This committee and the body as a whole has been told that by appropriating money last year in House Bill 5, the language of which said it was explicitly for the purpose of the Edward Jones Dome in St. Louis, that somehow we ratified gubernatorial behavior to go out and build a new stadium,” said Barnes. “I think that when a budget bill says money is for a particular purpose, it’s for that purpose.”

Barnes said that money should stay out of the budget until Nixon’s Commissioner of Administration, Doug Nelson, releases a letter that Barnes has been calling for the release of for months.

“The Office of Administration has claimed for over a year that they have a letter from bond counsel saying that what Governor Nixon tried and failed to do was authorized by the state constitution and state statutes. Now that the NFL stadium scheme is dead there’s no reason for that to remain secret. In fact there was no reason for it to remain secret before,” said Barnes.

“The fact that they refuse to show it to us leaves me with one of two conclusions. Either it doesn’t exist at all, or [Doug Nelson] is lying about it,” said Barnes.

Barnes and Ross would not say that the $12-million payment on the dome would certainly be restored if that letter is produced.

The entity that oversees the dome – The St. Louis Regional Sports Authority – is expected to testify Wednesday to the full House Budget Committee. Ross said lawmakers could learn more then about what not making that debt payment would mean.

Ross said the Authority did not respond to his requests for it to speak to his committee. Asked whether he thought today’s action would peak its attention he answered, “Maybe they’ll have an extra spring in their step to come.”

Ross said he anticipates the Nixon Administration will say not making the dome debt payment will hurt Missouri’s AAA-credit rating.

“Frankly that is entirely garbage,” said Ross. “This is not the same thing as a public bond. Those are found in House Bill 1 … but this is in House Bill 5 so it’s a different scenario, and frankly it needs to be treated as such.”