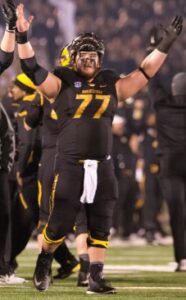 Three former Missouri Tiger football players earned invites to the NFL Combine this month.  Offensive linemen Evan Boehm and Connor McGovern along with linebacker Kentrell Brothers will make the trip to Indianapolis.  The Combine will run from Feb. 23-29th.

What the NFL is saying about each player:

Evan Boehm–One of the top offensive line recruits in the country coming out of high school, Boehm stepped right onto the field for the Tigers in 2012 — and hasn’t left the lineup since. He started 52 straight games for head coach Gary Pinkel, playing freshman year at left guard and then three straight years in the pivot. Boehm is a thick interior lineman who has a strong anchor and can move his feet well for the position, portending a long NFL career.

Bill’s take–Definite NFL material and has the best potential to start right away.

Connor McGovern–One of the strongest players in college football, McGovern has broken weight room records at Mizzou (like a 690-pound squat) and actually tore his pectoral muscle trying to bench 515 pounds. The Gatorade High School Player of the Year in North Dakota in 2010, McGovern’s not just all muscle. He’s started for three years at right guard, right tackle, and then left tackle as a senior. Though McGovern was solid for the Tigers at tackle, scouts consider him a better interior prospect due to that strength and his underrated movement skills. He hopes to move up boards throughout the process, just like his teammate, Mitch Morse, who was picked in the mid-second round by Kansas City in the 2015 draft.

Bill’s take–May be one of the strongest players, but has sloppy technique, called for way too many penalties and oh yeah…he can’t block.

Kentrell Brothers–Undersized for an inside ‘backer (a potential factor in the lack of interest by major programs in his home state of Oklahoma), Brothers recognizes plays quickly, works his way through traffic, and flows down the line very effectively as a run-stopper. His junior year was impressive (122 total tackles as a second-team All-SEC pick in 2014), but leading the nation in tackles per game (12.7, 152 total), making more plays in the backfield (12 tackles for loss) and proving himself able to make plays against the pass (two interceptions) and on special teams (three blocked kicks) made him an easy second-team All-American pick by the Associated Press and USA Today for 2015.

Bill’s take–Thought he was overlooked in college and will be overlooked in the NFL.  He’ll be drafted, but will have to work for every second of playing time he gets.