You are here: Home / Sports / Mizzou will continue to lean on Puryear and Rosburg down the stretch (AUDIO) 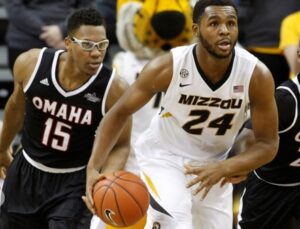 Mizzou Men’s Basketball (8-15, 1-9) continues on the road at Vanderbilt on Wednesday, with an 8 p.m. tipoff scheduled for broadcast on the SEC Network.

Mizzou freshman forward Kevin Puryear’s scored 22 points, a season-high, and grabbed six rebounds at Alabama (Feb. 6), becoming the 12th freshman in program history to record a 200-point, 100-rebound debut season.  Puryear is just the second Mizzou freshman in 12 seasons to accomplish the feat.  He leads the Tigers in overall scoring with his 11.3 points per game.

Anderson on how Puryear’s game has evolved.


Senior forward Ryan Rosburg had a career-best outing against the Crimson Tide with 17 points on 7-of-12 shooting from the field (3-of-3 FT), along with seven rebounds.  With a career scoring average of 5.0 points per game, Rosburg has scored in double digits on two different occasions since Jan. 13, including a career-high 17 points (7-of-12 FG, 3-of-3 FT) at Alabama (Feb. 6). Over the last seven games, Rosburg has averaged 7.9 points per game.

Nothing but glowing words from Anderson on Rosburg

Vanderbilt (13-10, 5-5) dropped its most recent SEC game at Ole Miss (Feb. 6) by a score of 85-78. After reeling off three-straight conference wins against Auburn (Jan. 12), Alabama (Jan. 16) and Tennessee (Jan. 20), the Commodores have alternated wins and losses over their last four games.  Sophomore guard Wade Baldwin IV scored 19 points and dished out nine assists against the Rebels, continuing to fuel his team-high scoring average (14.6). Junior forward Luke Kornet leads Vanderbilt with his 7.3 rebounds per game and also ranks eighth in the nation in blocks per game (2.9).