A Republican-sponsored proposal to repeal the death penalty is likely to come up for debate early this week in the state Senate. 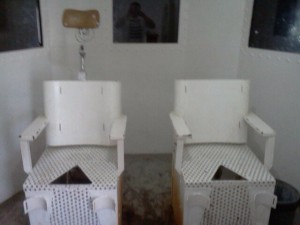 Missouri executed 40 people at its gas chamber between 1938 and 1989 at the now-decommissioned Missouri State Penitentiary. (photo courtesy; Adam Roberts)

Director of the State Public Defender System Michael Barrett supports a repeal. He says the death penalty is not an effective deterrent to murders and says the money spent arguing resulting cases could be better spent on more effective public safety items. He says those cases are far more expensive than the typical ones his office deals with.

“Two years ago we represented 74-thousand individuals in this state – misdemeanors, felonies, sex offenses. You combine all the expenses, personnel, overhead costs, we resolved these matters for an average of $345 per case,” said Barrett. “When you look at the death penalty costs, it’s $166-thousand per case.”

Barrett argues that money could go to other public safety needs.

Senator Bob Onder (R-Lake Saint Louis) opposes a repeal, and tells Barrett he’s not convinced one would make much difference in those needs.

“You saying we get rid of the death penalty, we put one drop into the bucket,” said Onder.

Onder also disagreed with those that argue for a repeal in light of people sentenced to death and later set free.

A repeal is supported by Democrats and some Republicans, but it considered unlikely to reach Governor Jay Nixon (D) in a Republican-controlled legislature, and Nixon supports the death penalty.

Missouri has always had the death penalty except during a national moratorium in the 1970s. The state Corrections Department lists 28 men as being sentenced to death.