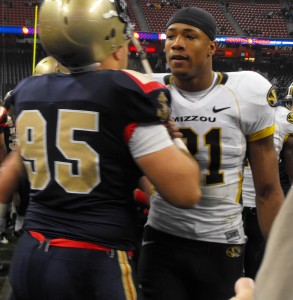 Six outstanding former University of Missouri athletic figures have been selected for induction into Mizzou’s Intercollegiate Athletics Hall of Fame.  They will represent the 26th induction class since the inception of the Hall in 1990.

The class will be formally inducted Fri., Feb. 26th, in a ceremony and celebration to be held that evening at the Columns Club at Memorial Stadium (East Side).  The group will also be recognized at the Mizzou Basketball game the next day against Texas A&M.  The Friday celebration is open to the public, and a limited amount of tickets are available for purchase for $40 by ordering online at www.TSFMizzou.com/HOF.  Table sponsorships are also available.

The 2015 class is full of star-studded performers who have been among the best in Mizzou history in their sports.  Here is a look at this year’s inductees, with more extensive biographical information which follows:

Overcame numerous serious injuries to establish himself as the Mizzou record holder for most career receiving yards … Had a monster senior season which saw him win first-team All-American honors as he led the NCAA with 1,781 yards on 113 receptions and 14 touchdowns.;

Won an NCAA title as a senior in 2010 at 184 pounds (one of five Mizzou wrestlers to win a national championship), and was a three-time NCAA All-American, a two-time Big 12 Conference champion, as well as a four-time Academic All-American.;

A standout two-sport performer who was a four-time All-American in various throws for the track and field team, while he also became a high-quality defensive lineman as a walk-on to the Mizzou Football team for two years, eventually starting 12 games.;

An outstanding two-sport standout who achieved at the highest level for Mizzou in both baseball and track and field.  Won 1st-Team All-American baseball honors as a senior in 1957 when he hit .437 and was a conference champion sprinter/hurdler who held MU records.;

Arguably the top gymnast to ever wear a leotard for Mizzou, who was a four-time All-American as well as a two-time Big 12 Gymnast of the Year.  Was national runner-up on the floor exercise in 2010 as she led the Tigers to their first-ever team appearance at the NCAA championships;

Here’s a more extensive look at this year’s class:

Overcame numerous serious knee injuries to post a storybook end to his career as he emerged as one of the top receivers in the nation, as well as one of the most prolific pass-catchers in Mizzou history … Won 1st-Team All-American honors as a senior in 2009, after beginning the year well off the national radar … Led the nation that year with 1,781 receiving yards on 113 receptions, with 14 touchdowns – all three marks which broke Mizzou single-season records … Was a consensus 1st-Team All-Big 12 performer in 2009, who was also voted a team captain by his teammates that year … Ended his career with an MU-record 2,778 receiving yards, and excelled in the classroom as he earned his undergraduate degree from MU in sociology in December of 2009 – needing just three-and-a-half years to accomplish that, as he came to campus and played as a true freshman in the fall of 2006 … Turned in nine 100-yard receiving games in his record-setting senior season, including consecutive 200-yard games against Baylor (214) and the next week at Kansas State (200) … His next two games included 173 yards against Iowa State followed by a career-best 233-yard outing against Kansas (15 receptions, one touchdown) to cap an astounding four-week stretch … Did all of this despite having numerous surgeries on his knee, after suffering a severe injury in the 2007 Big 12 Championship Game against Oklahoma … Came back the next season and played in 12 games, but was far from 100 percent, and he missed six games in his career, or his numbers would likely have been more impressive … As a true freshman, played in 13 games and caught 15 passes for 251 yards and 1 touchdown, which was a 74-yarder for a score in the 2006 Sun Bowl … Missed four games as a sophomore due to injuries, but improved numbers to 37 receptions for 417 yards and two touchdowns, including a brilliant 8-catch, 117-yard, one-touchdown outing against #2 Kansas in the game at Arrowhead Stadium where Mizzou defeated their rivals, 36-28, and ascended to #1 in the national polls afterward … As a junior in 2008, was still working through recovery on his injured knee, but played in 12 games and caught 26 passes for 329 yards and five touchdowns, despite missing two games.

One of the most decorated wrestlers in Mizzou history, who is one of five Tigers all-time to win an individual NCAA championship, when he claimed the 184 pound title in 2010 as a senior … Was a three-time NCAA All-American, starting with a 7th-place finish at 197 pounds in 2008, followed by a 5th-place showing at 197 in 2009 … Wrapped up his career by dropping to the lower weight class, where he closed out his stellar career by going 20-2 overall and helping lead the Tigers to a 10th-place team showing in the championships in 2010 … Helped Mizzou to three top-11 team finishes at the NCAA Championship meet, including a 7th-place team finish in 2009, 10th in 2010 and 11th in 2008 … Finished his career with a stellar mark of 104-16 overall (.867) which is the 4th-best career winning percentage in program history … His 104 career victories rank as the 17th-most in MU Wrestling annals … Was a two-time Big 12 Conference champion at 197 pounds (2007, 2008) … Was a standout in the classroom as well, as he was a four-time National Wrestling Coaches’ Association Academic All-American (2007-10), while he also took home 1st-Team Academic All-Big 12 honors in each of those seasons … His 21 career major decisions ranks 10th-best at Mizzou … Won the team’s Most Outstanding Wrestler award for his 2010 title-winning season, three years after he began his career by winning the team’s Most Outstanding Freshman award in 2007 … Was preceded in the Mizzou Athletics Hall of Fame by his older brother, Ben, who was also a national champion wrestler for the Tigers.

Was a two-sport standout for Mizzou who left as one of the top throwers in Mizzou Track and Field history, while he walked on to the football team for his final two years of eligibility and turned into a big contributor on the Tiger defensive line … In track, he established himself among the best overall throwers in a program which is tradition rich … Was a four-time All-American in four different weight events, finishing 5th in the NCAA Indoor Weight Throw in 2002, 7th in the NCAA Indoor Shot Put in 2003, 9th in the NCAA Outdoor Hammer Throw in 2002 and 11th in the NCAA Outdoor Discus in 2001 … Overall, he qualified for the NCAA Indoor and Outdoor Championships 10 times in his career … Was a team captain in track and won the Big 12 championship in the hammer throw in 2003, while earning All-Big 12 status 12 times during his career … Was ranked in the top-25 of U.S. Collegiate throwers in three events, and was a 2002 and 2003 USATF Championships qualifier in the shot put, while also earning a spot on the 1999 U.S. National Junior Team … Has the #2 all-time Mizzou marks still in three different throws: indoor shot put (63’-2”), outdoor shot put (64’-1.25”) and discus (197’-9”), while he’s also still #3 in the weight throw (71’-3.75”) and #4 in the hammer throw (209’-1”) … Joined the Mizzou football team as a walk-on prior to the 2002 seasons and not only earned two letters, but eventually worked his way into the starting lineup for 12 games over two years at defensive tackle … Saw action in 25 games during the 2002-03 seasons, and was part of Mizzou’s 2003 Independence Bowl team … Ended his career with 80 tackles in the trenches, including 14.0 tackles for loss and 5.0 quarterback sacks, along with three pass break ups … Made a big enough of an impression in his short time on the gridiron to earn a free-agent contract with the Kansas City Chiefs following the 2004 NFL Draft … Was an outstanding student who won 1st-Team Academic All-Big 12 football honors in 2003.

An outstanding two-sport standout who achieved at the highest level in both baseball and track and field, and is considered by many from the era as one of the best all-around athletes to ever play for Mizzou … Was a 1st-Team All-American for the Mizzou Baseball team as a senior in 1957, when he hit for an eye-popping .437 average … His career batting average of .399 still stands today as the all-time Mizzou record, and might very well never be broken … Was an All-Conference selection in baseball all three years he played (1955-56-57) and was an All-District pick as well in 1957 … Was the only Big Seven player to be chosen a first-team All-American that season … In track, was a standout sprinter and hurdler who at one time held Mizzou records in both the 60-yard dash and the 60-yard low hurdles … Was a Big Seven Conference champ in the 60-yard low hurdles, and also finished second one year in the Big Seven 60-yard dash … Once ran the 70-yard low hurdles in 7.7 seconds at the 1956 Iowa Duals, a time which bettered the American record of 7.8 seconds at the time … Was drafted by and signed a professional contract with the New York Yankees after his days at Mizzou, and spent several years with their Triple A affiliate.

The face of Mizzou Track and Field for nearly 30 years who became known for not only what his teams accomplished on the track, but just as much for his legacy of sports psychology and positive coaching, which eventually developed into the nationally-renowned Positive Coaching School at MU … Coached 143 All-Americans, 100 conference champions, 29 USATF National Team picks, 7 NCAA champions, 5 Olympians, 3 World Champions, 2 Olympic silver medalists and 3 collegiate record holders in his time at Mizzou … Helped develop some of the most notable athletes in Mizzou history, including Christian Cantwell (3-time World Champion, Olympic silver medalist), Natasha Kaiser (Collegiate record holder, 2-time Olympian, Olympic silver medalist), Derrick Peterson (Collegiate record holder, Olympian), Hans Uldal (Olympian), Chris Rohr (All-American, Big 12 record holder) and Pam Page (Olympian), among countless others … Was the Big 12 Conference Indoor Coach of the Year in 2000, the same year that he was inducted into the prestigious Drake Relays Hall of Fame … Was a longtime nationally-respected leader and ambassador for the sport who served as the president of the NCAA Division I Track and Field Coaches Association from 2006-09 … Also served as a sport psychology consultant to many different national teams from 1987 to 1996, including the U.S. Olympic team for the Atlanta 1996 Olympics … Took great pride and made a huge emphasis on the academic performance of his teams annually were recognized nationally among the best in the classroom.

One of the all-time greats to ever don a Mizzou leotard, and many would argue she is the most talented thus far … An all-around standout who was a dynamic and powerful tumbler for the Tigers over a three-year period after transferring to Mizzou following her freshman season at Utah … Won four All-American honors in her time at Mizzou, including a runner-up finish on the floor exercise at the 2010 NCAA Championships … Enjoyed a dominant senior season in 2010 in which she was one of four finalists for the national gymnast of the year award (Honda Award), as she won 11 different all-around meet titles and 36 event titles during the year (a program season record) … Was a two-time Big 12 Gymnast of the Year (2009,2010), both years during which she won the Big 12 all-around championship … Twice was named the South Central Region Gymnast of the Year (2009-10) … Won the Big 12 vault title in 2009 and 2010, and was also the Big 12 balance beam champ in 2009 … Claimed four NCAA Regional event championships, and she helped lead Mizzou to its first NCAA Championship finals team appearance in the 12-team era … Still holds or is tied for three Mizzou individual records: all-around (39.725), uneven bars (9.950) and floor exercise (9.975) … Was named the Big 12 Newcomer of the Year in her first year competing for the Tigers (2008).