Governor Jay Nixon today requested the federal government declare a major disaster for Missouri as a result of the two strong storm systems in late December that brought severe weather and historic flooding to much of the state. The storms led to 15 confirmed deaths and destroyed or significantly damaged nearly 1,000 homes. 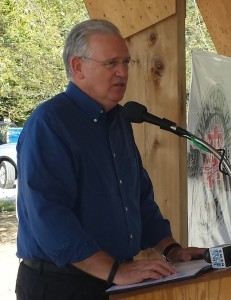 In his request to President Barack Obama, the Governor sought Individual Assistance so eligible residents in 41 Missouri counties can seek federal assistance, such as help with temporary housing and repairs, and to replace household items damaged or lost as a result of flooding. In addition, the Governor is seeking assistance from the Small Business Administration (SBA) to assist impacted businesses in the 41 counties. Those affected by the flooding are encouraged to document losses, including photographing damage and retaining receipts.

The Governor said damage assessments are continuing across the state to determine the costs for state and local government agencies and nonprofits in responding to and recovering from the disaster.

“Even as we continue to tally the costs of emergency response and of repairing roads, bridges and other public infrastructure, I’m asking for federal assistance from FEMA and the SBA to help Missourians with the uninsured losses to their homes and businesses,” Nixon said. “This was historic flooding with devastating impacts on many Missourians, and it will be a long recovery process. A major disaster declaration will help in that effort.”

On January 2, the Governor announced that the President had approved his request for a federal emergency declaration to speed debris removal and relieve the strain of response and recovery costs in the St. Louis region. As a result of that request, Nixon announced Operation Recovery, a federal and state debris removal program being coordinated by the Missouri National Guard, the U.S. Army Corps of Engineers (USACE) and the U.S. Environmental Protection Agency (EPA). Debris removal has been underway in Franklin, Jefferson, St. Charles and St. Louis counties.

For more information about the debris collection program, visit http://www.mo.gov/flood-recovery, which will continue to be updated as new information becomes available. Residents should follow local guidance for special instructions in assisting and complying with these efforts. The website also contains information about documenting property losses.