You are here: Home / Sports / Beckner Jr. and Brady pick up All-American honors. Mizzou one of just four schools to have multiple winners from writers 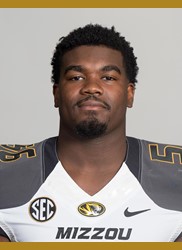 Having already earned Freshman All-America honors from both Sporting News and USA Today, Mizzou Football’s Terry Beckner Jr. (East St. Louis, Ill.) and Walter Brady (Florence, Ala.) earned the same distinction from the Football Writers Association of America, as announced Monday (Jan. 11). Beckner was one of 19 true freshmen on the team while Brady was one of 10 redshirt freshmen selected.

Mizzou was one of just four teams with multiple players honored by the FWAA Monday. The others were Alabama and Clemson (who will play for the national championship tonight) and Texas.

Beckner was one of the nation’s most dominant freshmen as a DT before being sidelined by injury on the first play vs. BYU on Nov. 14. In what turned out to be just nine games worth of work, Beckner tallied 27 total tackles (13 solo) while totaling eight tackles-for-loss and three sacks. His eight TFLs were the most among Mizzou interior linemen and he was playing his best football before getting hurt vs. BYU. In the previous four games prior to BYU, Beckner tallied five of his eight TFLs, 18 (10 solo) of his 27 tackles and all three of his sacks. He was one of eight true freshmen to see the field for Mizzou in 2015.

As good as Beckner was along the defensive line, Brady may have been the most productive freshman defensive lineman in the nation in 2015. He tied for the team lead in sacks (seven) and was second on the team with 12.5 tackles for loss with an interception, two pass break-ups, seven quarterback hurries and a fumble recovery. His seven sacks led all freshmen nationally and he ranked eighth in the SEC in that category. His 12.5 TFLs ranked 14th in the SEC and no freshman in the SEC had more sacks or TFLs than Brady. He was a Hendricks Award Watch List honoree midway through 2015.