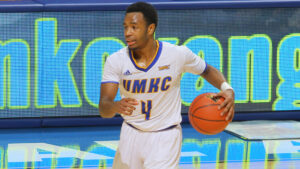 UMKC men’s basketball has now started the season 7-0 at home, matching the school record and winning its WAC opener 84-69 on Thursday at Municipal Auditorium against Seattle.

UMKC (8-8, 1-0 WAC) played its best first half of the season, starting the game on an 11-2 run. The Roos offense shared the ball and hit open shots against Seattle (6-9, 0-1 WAC), who was playing a zone defense most of the period. Junior guard LaVell Boyd was the early catalyst, hitting threes over that defense, while Martez Harrison hit a pair of open looks late in the half as well.

The UMKC defense kept the Redhawks off balance, forcing 11 turnovers, and only 35 percent shooting. The closest Seattle got was within five at 24-19 with 7:03 on the clock, but UMKC closed the half on a 14-5 rally to take its biggest halftime lead of the year into the break at 38-26.

The second half saw both teams clamp down defensively. UMKC scored only 10 points in the first eight minutes, while holding SU to only nine. The Roos started to pick it up with about 12 minutes on the clock though, using rebounding to keep possessions alive. A 10-0 rally that spanned five minutes extended the advantage to 18 for the Roos with 9:39 to play.

“We did an excellent job (rebounding), Shayok and those guys did a good job in there, especially on the offensive end.” Richardson said.

The Roos led by 20 with 8:36 on the clock, but Seattle started to foul and full-court pressure the rest of the night. The final eight minutes saw UMKC shoot 30 free throw attempts.

“We did a good job for the most part down the stretch at the foul line, and they were fouling us the last seven minutes,” Head Coach Kareem Richardson said. “Guys spaced the floor really well against their trapping, and we were strong and aggressive with the ball. Martez and Darius calmed us down a little bit as well.”

The Redhawks got it to within seven with 1:12 left, but UMKC hit its free throws down the stretch to seal it.

UMKC used a 40-32 rebound edge and turned it over only 11 times compared to 19 for SU. The Roos had a 20-6 advantage in points off turnovers.

Harrison scored a game-high 21 points, including 13 from the foul line, while Boyd tallied 20 points, including four threes, to go with four assists. Darius Austin also put up 10 points, while Shayok Shayok matched a career-high with 11 rebounds.

UMKC will host CSU Bakersfield on Saturday night, looking to break the school record for best home start, gunning for 8-0.