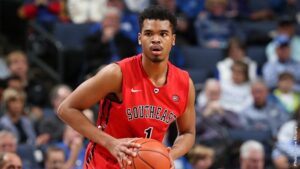 MSU, which leads the league in scoring defense and steals, forced 19 turnovers and posted 14 steals. Offensively, the Eagles were just as good, shooting 54.7 percent (41-of-75) from the field. Twenty-six of MSU’s points were off second-chance attempts and 27 more came off turnovers, and that was the difference.

“We can’t beat anybody when we don’t take care of the basketball,” said Southeast head coach Rick Ray. “They scored a lot of second chance points and points off turnovers. We need to play harder, tougher and smarter. We did neither of those things tonight.”

The Eagles made seven of their first eight field goals to spur a 16-2 run in the opening 4:40. Miguel Dicent and Corban Collins each buried a 3-pointer as all five MSU starters scored during the surge.

After Jamaal Calvin made two free throws to slice MSU’s lead to eight (30-22) with 8:16 left to play in the first half, the Eagles responded with an 11-2 jaunt to build their biggest lead of the half at 41-24.

The Eagles later led, 46-31, at the intermission as the 15-point halftime deficit marked Southeast’s second-largest of the season.

MSU had nine steals and forced 12 turnovers, while shooting 55.9 percent (19-of-34) in the first half. The Eagles only missed four times from the field (12-of-16) in the first 10 minutes of the contest, scoring 20 of their points in the paint.

The Eagles continued to pour it on the second half and managed to take their biggest lead when Treshaad Williams’ layup made it 96-59 at the 2:00 mark, MSU’s last basket of the night.

Arrington, one of five double-digit scorers, shot 8-of-11 from the field and a near-perfect 4-of-5 from 3-point range.

DeJuan Marrero followed with 12 points, Collins added 11 and six assists, and Dicent and Williams each had 10 points.

As a team, MSU dished out 29 assists with three players getting five or more.

Isiah Jones led all Southeast scorers with 15 points. Jones knocked down three 3-pointers and now needs five more to reach 100 in his career.

Meanwhile, Joel Angus III had 12 points and both Calvin and Tony Anderson scored 10 apiece off the bench.