You are here: Home / News / Kroenke lays out details as to why it’s time for the Rams to get out of St. Louis…and its harsh (VIDEO) 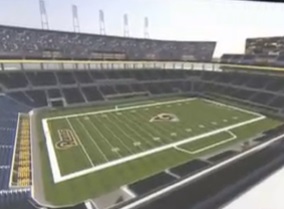 A view of the seating arrangements from inside the proposed stadium.

Let’s be honest, we all can admit that St. Louis is a baseball town.  The Cardinals rule the town.  There is also a long and strong hockey presence in St. Louis with a loyal following of the Blues.  That, along with the fact of what I’ve said all in that Governor Nixon’s task force’s plan for a stadium has been a joke from day one, are the same reasons Stan Kroenke gave the NFL when the Rams applied for relocation on Monday.

Kroenke sees St. Louis as a two-sport city that has no room or growth for football and offers a stadium plan that wouldn’t appeal to any NFL team, let alone his.

In the final section of that document, which was filed to the NFL on Monday, the Rams indicate stated, “No NFL club would be interested in the RSA’s New St. Louis Stadium. Any NFL Club that signs on to this proposal in St. Louis will be well on the road to financial ruin, and the League will be harmed.”

The task force quickly responded.  “The Rams’ assessment of their experience in St. Louis after 21 seasons of remarkable support by fans, businesses and the community is inaccurate and extremely disappointing. We will remain in contact with league officials and team owners, as appropriate, in the days ahead of the meeting in Houston. Otherwise, nothing has changed. We have a spectacular stadium proposal that delivers the certainty the NFL has asked for, and we are and will continue to be an excellent home for the St. Louis Rams.”

Of course, Kroenke is going to hammer away at Nixon’s plan and the city of St. Louis, because he has his sights on a stadium that would be the biggest in the NFL when it is completed for plan in 2019.

After arbitration ruled in favor of the Rams of what it would cost to spruce up the dome, Nixon’s task force threw up a couple of artistic renderings and a pipe dream that a new stadium would not cost any additional taxpayer money.  Since then Dave Peacock has been fighting uphill against the NFL, which has led me to believe the league wants out of St. Louis as well and is doing everything possible to block Peacock.

It would cost close to $1.9 billion and cover three million square feet.  The plans call for 70,240  seats and an additional 30,000 people in a standing-room-only capacity for large events. It also includes 274 suites, 16,300 premium seats and 12,675 dedicated surface parking spaces.  This not only passes the St. Louis proposal, but all the Carson, California project, which would house both the Raiders and Chargers.