You are here: Home / Sports / Steen rallies the Blues past the Preds in OT after giving up two, third period goals 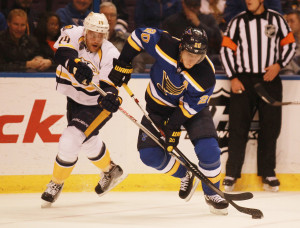 St. Louis Blues Alexander Steen works the puck around Nashville Predators Mattias Ekholm of Sweden in the first period at the Scottrade Center in St. Louis on December 29, 2015. Photo by Bill Greenblatt/UPI

Alexander Steen scored with 58.2 seconds remaining in overtime to give the St. Louis Blues a 4-3 win against the Nashville Predators at Scottrade Center on Tuesday.  Steen got a pass through the Nashville zone from Paul Stastny and took a wrist shot past Nashville goalie Carter Hutton.

The Predators trailed 3-1 with four minutes left in the third period, but rallied to tie the game.

Dmitrij Jaskin had a goal and an assist, Kevin Shattenkirk and 19-year old Robby Fabbri scored.  Jori Lehtera had two assists for the Blues (23-12-4). Goalie Jake Allen made 30 saves to beat the Predators for the third time this season.

St. Louis is an NHL-best 17-5-0 against the Western Conference.