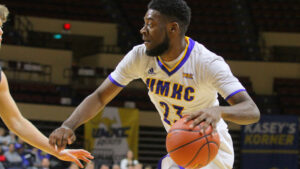 The UNC-Wilmington Seahawks built an early lead thanks to UMKC turnovers, and never let the ‘Roos back in it, taking a 76-56 victory on Tuesday in its final game of the Billy Minardi Classic in Louisville.

“Their defense was superb. We have to go back to the drawing board on offense. When you don’t put the ball in the basket it makes it tough,” UMKC Head Coach Kareem Richardson said. “Defensively for us, for the second straight night I don’t think our defense was that poor. Honestly I thought the difference in the first half was turnovers and layups. They made their layups and we didn’t. Then you’re trying to claw back after that first half, and it made it very difficult.”

The opening six minutes was tight, but UNCW (7-3) clamped the UMKC (7-6) offense down after that, holding the ‘Roos to only two points over the next six minutes to turn a one-point lead into a 17-point margin by the 9:58 mark. The Kangaroos could never recover from that rally the rest of the night, getting it to within 12 on two occasions during the rest of the half, but no closer.

The Seahawks took a 44-28 lead into the half, forcing UMKC into 10 turnovers and 1-of-7 from three point range. The ‘Roos missed several point-blank shots inside in both halves. Darius Austin and Shayok Shayok each scored eight points in the first period to lead UMKC.

The second half was played much more evenly, but UMKC could only cut the lead down to as little as 10 at the 14:38 mark on a three by Austin. UNCW had an another answer though, this time going on a 11-0 rally over a span of three minutes to put the game out of reach.

UMKC was only out-scored 32-28 in the final half, and actually held UNCW to 40 percent shooting on the night, but UMKC shot nearly the same percentage in the game. The Seahawks also used a rebound advantage of nine, and had an 18-to-9 assist-to-turnover ratio compared to the 8-to-15 margin for the Roos.

Austin was the only UMKC player in double figures with a career-high 16 points, while Martez Harrison led the way on the boards with seven.

UMKC will continue its road swing next Tuesday when it travels to play Oklahoma State in Stillwater for a 7 p.m. tipoff.