One Republican candidate for Governor told Missourinet he is “gravely concerned” about the drowning of an Iowa man in state patrol custody, which has since led to the trooper in that case being charged. 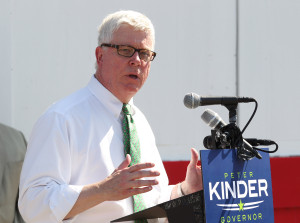 20-year-old Brandon Ellingson drowned while handcuffed and in the custody of trooper Anthony Piercy on the Lake of the Ozarks on Memorial Day, 2014. Missourinet asked Lieutenant Governor Peter Kinder about that incident on December 6, following a candidate’s forum at the Lake of the Ozarks. 12 days later, Piercy was charged with involuntary manslaughter related to Ellingson’s death.

Kinder attributes that situation to the 2011 merger of the Highway and Water patrols.

“In this instance I think we had a highway patrolman who was not fully trained as he should have been,” said Kinder. “I would not be surprised if before the final chapter on that is written that the state has the serious liability.”

Kinder called Ellingson’s drowning, “a dark episode in the history of this state and law enforcement.”

Kinder said he opposed that merger.

Missourinet reached out to the campaigns of the other candidates for governor seeking comment on Ellingson drowning case and its handling, but none have responded with comments. The campaign of Democrat Chris Koster referred Missourinet to the Attorney General’s Office, which Koster currently holds and is a litigant on behalf of state entities in the civil suit filed by the Ellingson family.

Piercy has been placed on leave without pay after a special prosecutor announced the charge against him on Friday.