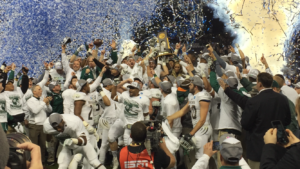 The Rams entered the game undefeated and finish their season 13-1.

The Bearcats were playing in their ninth title game in school history in the first ever title game in Kansas City, KS.  Previous D-II championship games were held in Florence, AL.

Northwest held Shepard to just 97 yards of total offense, and -39 on the ground in 28 attempts.

Senior quarterback Brady Bolles won his second championship of his career by completing 20-of-27 passes for 233 yards and a touchdown.  Sophomore running back Jordan Grove rushed the ball three times, scoring twice on the ground.  He was also the leading receiver with five catches for a team high 104 yards.  He even threw a pass for 45 yards.

Shepard fumbled on the the first play from scrimmage and Northwest cashed in quickly going two plays and five yards with a one-yard score from Grove.

Bolles threw a one-yard touchdown pass in the second quarter to put the Bearcats up 14-0. The game got out of hand when Simon Mathieson kicked a 30-yard field goal to make it 17-0 with 38 second to play in the first half.

Shepard, instead of running out the clock, tried a pass after returning the ensuing kick to the Bearcats 48.  Bryce Enyard picked off Rams quarterback Jeff Ziemba and went 59 yards the other way to end the half 24-0 as time expired.

Shepard scored their only touchdown in the third, and Northwest added two more scores on another field goal by Mathieson and another one yard score from Grove.