You are here: Home / Sports / Mizzou settles on former Sooner QB Heupel as new offensive coordinator. “This is a special place.” (VIDEO) 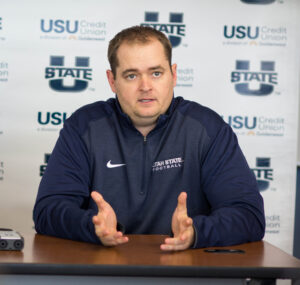 The 37 year old Heupel, played two seasons at Oklahoma before becoming an assistant coach under Bob Stoops for the Sooners for 14 seasons.  Heupel spent one season as the Aggies playcaller.

Heupel was as the consensus All-American quarterback and Heisman Trophy runner-up, who led the Sooners to a national title in 2000.  He was also quarterbacks coach in 2008 when Oklahoma beat Missouri in the Big XII championship game in Kansas City.

Watch Heupel in action while at Utah State.

“I’m really pleased to have someone the caliber of Josh Heupel join our staff,” said Odom.  “I’ve known him for a long time and have always respected him highly, as a player, a coach, a recruiter and a coordinator.  I’ve been impressed by the offenses that he runs, they’re very difficult to defend, and his achievements speak for themselves.  He’s a high-character person who has the type of leadership abilities that will be outstanding for our program, and he’s exactly what we’re looking for.  We’re excited to have him on board,” said Odom.

“I am very grateful to Coach Odom for this opportunity,” said Heupel.  “First and foremost I believe in the person Barry Odom is and what he stands for.  I believe in the vision that he has for this program.  I have a lot of respect for Mizzou and the football program, as someone who’s seen it from an outsider’s perspective for a long time.  I believe this is a special place that has just scratched the surface of what it can be, and it’s a program that is capable of winning championships on a consistent basis.  I want to be part of that.  I think it’s a great time to be at Mizzou, and I’m excited to get there and to go to work,” he said.