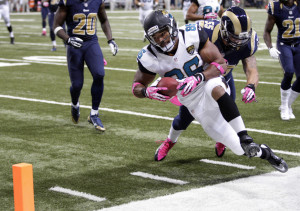 Clay Harbor, former Missouri State star, reaches for the endzone in a game between the Jags and Rams (photo/NFL.com)

OK, I’m going to try to make sense of the latest from St. Louis on the new stadium. The Board of Alderman in St. Louis voted to approve a change in plans. The alderman make their official vote on this Friday. 15 votes are needed to pass. I’m expecting it will pass.

However, here’s how this is going to play out…I’ve said it from the beginning. The NFL will allow Kroenke to move his team to LA. The other owners are not going to stop one of their own from making money. So why is the NFL trying to help St. Louis?

If you give me five minutes, I’ll explain in my video below.