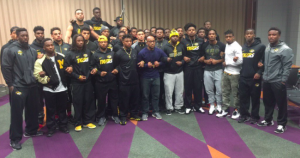 Missouri House of Representative Rick Brattin from Harrisonville is offering a bill in 2016. It reads that any college athlete on scholarship who refuses to play for a reason unrelated to health shall have his or her scholarship revoked.

This is in response to when the Mizzou football team protested in early November.

I’ll share Representative Brattin’s comments and then share my thoughts on how his use of the words, ““put a stop to this type of behavior,” is alarming to me.