You are here: Home / Legislature / House leader won’t predict whether House will vote on right-to-work in 2016

The state House’s Republicans have met to discuss priorities for the coming session, but their leader won’t predict an answer for one key question – whether right-to-work will come to a vote in his chamber. 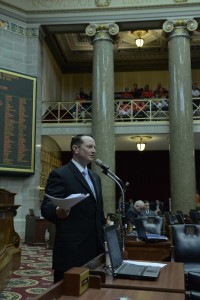 Representative Eric Burlison carried the right to work bill in the state House again in 2015, and has filed a version for 2016. (Photo courtesy; Tim Bommel, Missouri House Communications)

Many speculate that if backers in the state House can’t find more support for right-to-work than it had this year, when they failed to overturn Governor Jay Nixon’s (D) veto, it won’t be brought up for a vote in the Senate. This year Republicans is in the Senate forced a vote on the issue that led to Democrats shutting down debate in the final days, allowing only one more bill to pass that chamber following the right-to-work vote.

House Speaker Todd Richardson (R-Poplar Bluff) says a party priority is labor reform, but it will let the chips fall where they may on that proposal.

“We haven’t made any official decision or firm decision on what’s going to happen with right-to-work or with any other piece of legislation at this point,” Richardson told Missourinet. “We’ll kind of let the process play out as we get back in session.”

Representative Holly Rehder (R-Sikeston) is the sponsor of another key issue for labor, called “paycheck protection” by supporters. She thinks the House should definitely vote on right-to-work.

“The states that have passed right-to-work have shown a steady march ever year, getting it a little bit further every year until it passes,” Rehder told Missourinet. “We need to continue marching down that path. We need to continue with the fresh success stories – the numbers [in the Missouri General Assembly from this year’s session], and this state that passed it two years ago and this state that passed it three years ago, and see how their jobs are increasing.”

2015 is the first year the Missouri legislature sent a right-to-work bill to a governor.

Richardson says labor reform is a top priority for his caucus.

“We believe that labor reform will help improve the economic environment and help grow our economy,” said Richardson.

Four right-to-work bills have been filed in the House and one in the Senate.