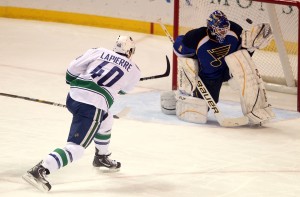 The Flyers reeled off three second period goals to beat the Blues, 4-2 at the Scottrade Center.

Michael Raffl, Matt Read and Claude Giroux [[ zhih-ROO ]] lit the lamp in the second to give Philadelphia a 3-1 lead.

Ryan White added a goal in the closing seconds. Michal Neuvirth made 35 saves in the win.

David Backes and Robby Fabbri scored for the Blues, who have lost four of their past five games.