You are here: Home / Business / Tax incentives for businesses that relocate to Missouri proposed again

The state legislature will again consider whether to offer a tax incentive to out-of-state businesses to relocate to Missouri. 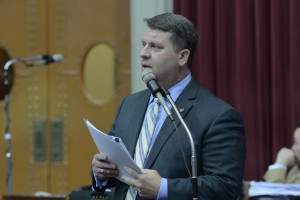 Representative John McCaherty (R-High Ridge) has filed again for 2016 his proposal to offer businesses a tax deduction equal to up to half the expense of eliminating a business outside the state and moving it into Missouri. The business would have to stay in Missouri for at least ten years or pay back that deduction.

He tells Missourinet he thinks there are many businesses that would come to Missouri if his tax incentive proposal passes, and those would bring a lot of jobs.

“Probably more than we know,” said McCaherty. “I know just AT&T, Sprint, just the telephone companies alone, there’s thousands of jobs there that have left the state over the years. Of course there’s other industries too, so you’re talking about utilities and any type of thing that uses service companies to where they can take a branch of their business and move it somewhere else.”

McCaherty believes there is a lot of support for his proposal.

This year it cleared the House and passed out of a Senate committee.