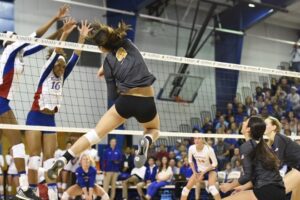 “Obviously, it’s always disappointing to see your season come to an end like this,” head coach Wayne Kreklow said. “We give a lot of credit to Kansas as they are a really solid all-around team. It was a great venue tonight as both fan bases were loud and passionate. This team should be really proud of its accomplishments this season. Our ladies showed incredible resiliency and passion all season long. I’m very proud of this squad.”

Mizzou struggled with its attack early on and Kansas held a comfortable lead throughout the first set. The Jayhawks’ strong defense led to uncharacteristic errors by the Tiger starters, leading to a 1-0 match deficit. Junior Carly Kan (Honolulu) and redshirt sophomore Kira Larson (Fargo, N.D.) each posted three kills despite the team dropping the opening set.

Kansas continued its outstanding defense at the net in set two, propelling its 2-0 set advantage over the Tigers. Mizzou once again had trouble finding a rhythm on offense while the Jayhawks hit better than .300 for the second set in a row.

Mizzou came to life in the third set as its offense and defense both stepped up. The Tigers pushed Kansas to the brink, holding a 24-20 advantage late in the set. Kansas wouldn’t go down quietly as it used the momentum from the home crowd to even the set at 24 apiece. The Tigers later held another set point opportunity but the Jayhawks reeled off three consecutive points to seal their 3-0 match sweep.