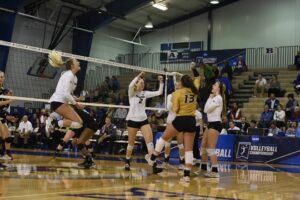 Mizzou Volleyball opened its 2015 NCAA Tournament on Thursday with a 3-1 (21-25, 25-22, 25-21, 25-17) triumph over Missouri State. With the win, the Tigers advanced to the second round of the NCAA Tournament for the seventh time in program history. All seven second round trips have come under Wayne and Susan Kreklow’s tenure in Columbia, Mo.

“We came out tonight a bit slow but I’m really pleased with how we fought back and played well the rest of the way,” head coach Wayne Kreklow said. “Missouri State is a great team and we knew we had a tough challenge ahead of us. Credit goes to our ladies for not getting down on themselves and coming together as a team. We had a real balanced attack tonight and served well. Those have been two of our biggest keys to success all season long.”

Larson’s 12 kills on .321 hitting marked her 14th double-digit kill match of the season and the 16th time hitting better than .300 in a match.

Missouri State got off to a fast start, building an early 12-6 advantage over the Tigers. Mizzou answered nicely as it got within two points on multiple occasions. The Tigers appeared to have the momentum after evening the score at 19 apiece but the Bears concluded the opening set with a 6-2 run. Peltier posted a team-best five kills in the first set.

The Tigers evened the match after producing 16 kills on .382 hitting in the second set. Larson paced Mizzou’s offense and stood with eight kills on .312 hitting through two sets. After falling behind early, Mizzou regained its advantage at 9-8 and never relinquished its lead again.

Mizzou’s offense one-upped itself in the third set, tallying 16 kills on .400 hitting en route to a 2-1 set advantage. Both Peltier and Larson eclipsed double-digit kills for their respective matches, keying the Tigers’ attack against the Bears.

The Tigers dominated early in the fourth and final set, clinching their opening round victory over Missouri State. Mizzou hit better than .300 in each of the last three sets and five Tigers recorded seven-plus kills on the evening.

Mizzou concludes its trip to Lawrence, Kan., on Friday, Dec. 4, for its second round matchup in the 2015 NCAA Tournament. The Tigers will face Kansas with first serve scheduled for 6:30 p.m. (CT) inside the Horejsi Family Athletics Center. The match will broadcast live on ESPNU via WatchESPN.