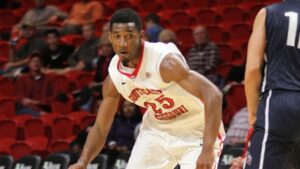 SIU scored 19 points off turnovers and outscored Southeast, 48-26, in the paint. Sean O’Brien finished with 22 points and 11 rebounds, collecting his third-straight double-double.

SIU led, 38-35, with 15:03 left in th game, but outscored Southeast 36-15 the rest of the way. Tyler Smithpeters knocked down a 3-pointer to kickstart the rout that saw seven different Salukis score.

Both teams started slow in the first half, as it took eight minutes for either squad to get double figures in the scoring column. SIU and Southeast combined to miss 17 shots and commit 12 turnovers.

Southeast’s zone defense limited the Salukis to 2-of-15 from 3-point range in the game’s opening 20 minutes, but O’Brien shot 6-of-10 from the field with 12 first-half points.

“We knew that Sean O’Brien would be really good in the middle of our zone, in the short corners and the high post,” said Southeast head coach Rick Ray. “I thought we did a poor job of putting a body on him once we got into our zone.”
The Redhawks trailed by five at halftime and kept it close for five minutes in the second half before falling apart. They shot just 34 percent from the field, including 3-of-15 from beyond the arc.

“There comes a point in every game where we give in and break down,” said Ray. “What’s a shame is when people see the bottom line on ESPN they’ll see that we got beat by 24 — anybody that was at the ballgame sees that we were in this game.”

SIU had its share of struggles from the perimeter, making just 5-of-27 from 3-point range. Beane was 4-of-8, but the rest of his teammates went a combined 1-of-19. The Salukis did not attempt a free throw in the game until O’Brien made a pair with 12 minutes remaining in the contest.

Ladarius Coleman scored a career-high 10 points off the bench to lead Southeast. Coleman shot 3-of-5 from the field and made a perfect 4-of-4 free throws in 29 minutes. Trey Kellum and Antonius Cleveland each followed close behind with nine points. Cleveland had a team-high six rebounds, as well.

Southeast, which has lost seven in a row dating back to last season, heads to Memphis on Dec. 5. That game, which is scheduled for 6:05 p.m., CT, at FedExForum, will be televised on the CBS Sports Network.