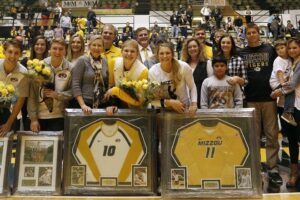 “I’m proud of how our team focused and bounced back nicely tonight following Wednesday night’s tough match,” head coach Wayne Kreklow said. “The crowd was great as usual tonight and they have been a tremendous factor into our success all season long. It’s always great to win on senior night and tonight we were able to send Regan Peltier off with a win. We’re looking forward to Sunday night and seeing our destination for next weekend’s NCAA Tournament opener.”

2015 SEC Freshman of the Year, Alyssa Munlyn, posted another outstanding match against the Gamecocks as she finished with nine kills on .467 hitting and five total blocks. Munlyn’s five blocks tonight gave her 142 total blocks for the season, marking a new single-season total blocks record in Mizzou Volleyball history.

The Tigers’ 26th victory tonight moves them to tied for fifth place in all-time Mizzou Volleyball single season wins total. Mizzou’s 26 wins is also tied for the second-highest win total since the 2002 season.

Mizzou will gather on Sunday, Nov. 29, to learn its first and second round destination for the 2015 NCAA Tournament. Fans and media are invited to attend the Tigers’ watch party which will be held inside the Clinton Club at Mizzou Arena. Doors open to the public at 7:30 p.m. (CT).