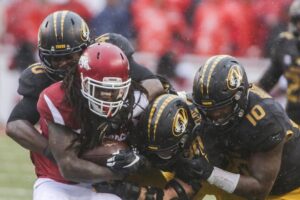 The defense for Mizzou (5-7, 1-7 SEC) could have hardly started any better, as they allowed positive yardage on just one of Arkansas’ first eight plays. In all, five of those eight plays went for negative yardage, including a Ricky Hatley sack to give the defense two three-and-outs to start the game.

But the Hogs’ offensive line – the largest in the country – quickly asserted its will. Collins scored touchdowns of four, seven and 25 yards on consecutive first-half drives for the Razorbacks, who registered their first win in the series since the 2003 Independence Bowl. Arkansas (7-5, 5-3) ran 52 times for 208 yards (4.0 ypc), and held a 2-to-1 edge in time of possession.

Kentrell Brothers added another 12 tackles to his nation-leading total, along with 2.5 tackles for loss and a pass breakup. He now has 152 tackles on the season, which is the fourth-most in Mizzou history. His 358 career stops tie him with Sean Doyle (1999-2002) for eighth place on the Tiger career charts.