You are here: Home / News / Man who escaped from a south central Missouri jail is back behind bars 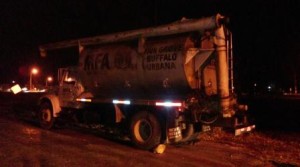 “We got a call about an MFA grain truck being stolen. Buffalo PD joined in with Highway Patrol on the pursuit and apprehended the suspect at Norton Road and Highway 44,” said Boland.

Cornelius was headed south to Springfield. He was in jail on burglary charges.

The guard was not injured.