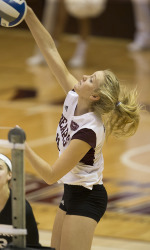 Missouri State hit .288 in the match and stifled the Ramblers to a .102 team attack efficiency, as MVC Player of the Year Lily Johnson led the way with 18 kills while Simone House had four blocks.

House started a 6-0 run early in the first set with a kill-block-kill sequence that helped the Bears to a 9-4 lead. Ashley Ophoven, who had nine kills in the match, scored two during a 4-0 run to 15-7, and Johnson and House teamed up for a block and a 20-10 lead as MSU hit. 361 in the set.

After the Bears led 4-0 in the second set, Loyola used a pair of runs to grab a 14-12 lead midway through. Kinsey Batten’s kill got the score back in MSU’s favor at 16-15, and three straight LUC errors made it 19-16. The Ramblers twice pulled within two points before four Bears notched kills for a closing 4-0 run capped by Ophoven’s fifth kill of the period.

Missouri State pulled away in the third set with a 7-0 run to a 15-7 advantage, and led by at least seven points for the rest of the match. House and Lauren Boone each had solo blocks during the run, while Johnson smashed nine kills in the final frame without a hitting error.

The Bears had 46 kills compared to 32 for LUC, and Emily Butters (17) and Tatum Marshall (11) each reached double figures in digs.

Batten dished out 37 assists to surpass Katelyn Panzau for fourth in school history with 2,825 career helpers.