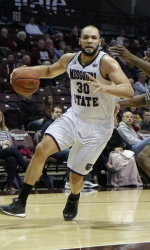 Missouri State got 16 points and 8 rebounds from senior Camyn Boone to lead the Bears past visiting William Woods, 77-56, here Friday in the home opener for MSU.

Missouri State (1-4) won its 13th straight home opener and improved to 33-1 in its Division I era in home-opening games. Paul Lusk’s squad also got 12 points from Chris Kendrix, 11 from Dequon Miller and 10 from freshman Jarred Dixon in the win.

William Woods was led by Bryan DeGeare who tallied 15 points and a game-high 9 rebounds.

After leading by 11 at the midway point, the Bears held the Owls without a field goal for the first 6 minutes of the second half to extend their lead to their biggest of the afternoon, 54-30. The 15-2 rally to start the final stanza marked the Bears’ best run of the young season.

William Woods (4-3) used a series of 3-pointers, including a pair by DeGeare, to climb back to within 62-46 with 8 minutes to go, but the Bears responded with some defensive intensity, capped by a steal and layup by Shawn Roundtree, Jr., and a trey by Miller that made it 70-49 with 4:18 remaining.

Eleven different MSU players landed in the scoring column with freshmen Obediah Church and Robin Thompson accounting for 6 and 5 rebounds, respectively. Loomis Gerring corralled 7 rebounds, as did Dorrian Williams who led the Bears with 5 assists.

In the first half, the Bears jumped out of the gates by making six of their first eight shots to lead 13-5 less than 5 minutes into the game. But a 15-2 run by William Woods over the next 7 minutes kept things interesting until the under-eight media timeout.

Missouri State then reeled off 12 of the next 14 points to push ahead 27-22, including 8 points by Boone on the run, and climbed ahead 39-28 at the break after a trey by Kendrix just prior to the intermission.

Missouri State’s 71 field goal attempts marked the most by the club since it jacked up 72 shots at Illinois State on Jan. 25, 2012, while its 52 rebounds matched the most ever under Lusk and the most since the 2013-14 season opener at Old Dominion.

The Bears wrap their current home stand Tuesday at 7:05 p.m. when they host the Utah State Aggies in the Mountain West-Missouri Valley Challenge at JQH Arena.