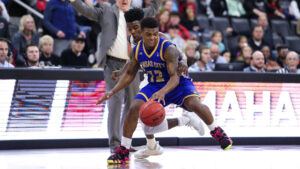 UMKC survived a scare on Wednesday night, but in the end came away with a 73-72 win over Lincoln at Municipal Auditorium.

The ‘Roos pushed their lead to as many as seven before the half, but Lincoln scored the final five points of the half to make it 38-36 at the break.

UMKC shot a blistering 59 percent in the half, while LU hit for 47 percent. The difference proved to be a 10-4 edge on the free throw line for the ‘Roos.

The second half saw Kansas City hold the lead the entire way, and looked as if it would run away with it a few times, especially at the 7:21 mark when a Martez Harrison layup put UMKC up by 11. Each time though, the Blue Tigers answered, mostly from Anthony Virdure, who scored 29 points in the game for LU.

With 2:21 to play the Blue Tigers cut it to one, but a pair of Darius Austin free throws put it back to three. Another Virdure jumper cut it back to one, but this time it was Boyd who answered, hitting a three with 1:18 to play to move it back to four.

With under a minute to play, Harrison hit two free throws to get it back to six, but the ‘Roos went only 1-of-4 from the line in the final 25 seconds, giving LU a chance to heave a half-court shot that was off the backboard and wide.

Harrison scored 17 points and pulled down seven rebounds in the game, while King set a career-high for the second straight game with 15 points. UMKC shot 55 percent in the game, and held the Blue Tigers to 42 percent, 39 in the second half. Boyd also tallied 10 points for the ‘Roos.

UMKC was only 24-42 from the line in the game, or it would have run away with it. The Blue Tigers were led by Virdure’s 29, as well as Jaylon Smith with 22 points.

UMKC will host the 6-0 South Dakota State on Saturday at noon at Municipal Auditorium.