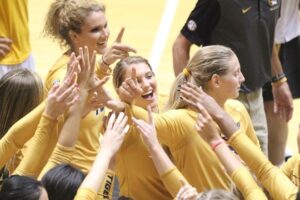 “Tonight was a great atmosphere and both teams showed why they’re the top two squads in the SEC,” head coach Wayne Kreklow said. “We came out well in the opening set but both teams really played tough the remainder of the match. Credit to Texas A&M for fighting back tonight and their entire season. We still have a lot ahead of us this season and we’re looking for great things in postseason play.”

Sophomore Courtney Eckenrode (The Woodlands, Texas) passed effectively through the night, totaling 34 assists for the black and gold. It marked her sixth 30-plus assist match of the season.

Texas A&M took an early lead in set two and never let go of its advantage. Mizzou was tough at the net despite dropping the set, adding five more blocks to its match total. Munlyn earned two more total blocks, extending her match total to four through the first two sets. Larson had an excellent offensive set, tallying five kills on .625 hitting.

Set three was a thriller throughout as the Tigers and Aggies had 12 ties and two lead changes. The two teams continued to exchange points late before Mizzou ultimately prevailed, 27-25. The Tigers’ defense continued their impressive night with five additional blocks in the set.

The Tigers swung well in set four, leading to a late 22-18 advantage over the Aggies. Texas A&M responded in a big way out of a timeout, ending the set on a 7-0 run and tying the match at 2-2. Mizzou hit better than .300 for the second time Wednesday despite dropping the set.

Mizzou welcomes South Carolina to town on Friday, Nov. 27, for its 2015 home finale. Friday will be Senior Night at the Hearnes Center as the team honors Regan Peltier. First serve is scheduled for 6:30 p.m. (CT) and the match will broadcast live on SEC Network+ via WatchESPN.

Previous Post: « Crosby scores twice to help down the Blues in overtime in Pittsburgh
Next Post: ‘Roos survive scare from the Blue Tigers as UMKC downs Lincoln »