(NASCAR)—Kyle Busch, who missed the first eleven races of the season because of injuries suffered in a crash at the Daytona Speedway in February, has won NASCAR’s top championship by outrunning  defending champion Kevin Harvick. Longtime observers already are calling Busch’s championship “the ultimate NASCAR comeback,” and a “comeback for the ages.” 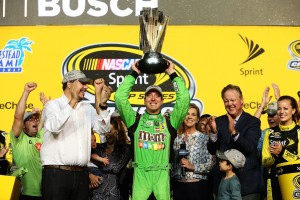 Busch grabbed the lead on a re-start with seven laps to go and beat Harvick to the checkered flat by 1.552 seconds.  Jeff Gordon and Martin Truex, Jr., the other two drivers eligible to race for the championship, finished sixth and twelfth respectively.  The race was the last for Gordon, a four-time champion.  He’ll be in the broadcast booth next year.

The finish was the thirteenth time this year Harvick has finished second, a NASCAR record, breaking Bobby Allison’s record set in 1972.  He also had three wins and led more laps this year than any other driver.

Columbia’s Carl Edwards, one of Busch’s teammates, ran in the top ten most of the night but faded at the end to eleventh place.  Edwards, who forecast two weeks ago that one of the four drivers in the Joe Gibbs Racing stable would win the championship, finished fifth in the points.  One of his other teammates, Matt Kenseth, was seventh in the race and fifteenth in the final points standings.  The fourth driver, Denny Hamlin, started from the pole at Homestead, dropped laps back with early mechanical problems, but came back to finish tenth in the race, ninth in season points.

Joplin driver Jamie McMurray was 13th in the race and finished in the same position in the last race of the year.  Sometime-Missourian Clint Bowyer was caught up in a multi-car crash on the 45th lap and finished last in his final race with Michael Waltrip Racing, which is going out of business.

Busch won five of the 25 races in which he ran after coming back from his injuries. He was in the top ten sixteen times, in the top five a dozen times.

He wasn’t in the top ten again until he finished fourth at Kentucky, the 19th race. But he ran in the top ten in twelve of the last seventeen races of the year, including a second win at Darlington.

Several drivers from other racing series were at Homestead to honor Gordon including reigning Formula 1 champion Lewis Hamilton, past Indianapolis 500 champions Mario Andretti and Helio Castroneves.  But one IndyCar driver had an additional motive for being there. James Hinchcliffe wants to give NASCAR a whirl.  He was shopping for a ride at Watkins Glen in the Xfinity Series next year.  The series is the equivalent of baseball’s Triple-A.

(IndyCar)—First tests by some IndyCar drivers at Phoenix International Raceway, the site of IndyCar’s second race of  2016, have some drivers talking of possible new lap records.  The season opens March 13 on the street course in St. Petersburg, Florida.  The series will return to PIR for the first time since 2005.  Driver Marco Andretti noted after the tests that the NASCAR lap record at the Phoenix mile is 25.1 seconds but the IndyCar lap record set by Arie Luyendyk in  1996 is 19.068 seconds, an average of 183.599 mph. “We’re going to be sub-twenty seconds around here,” he forecast.   The teams will test again February 26-27.

Former Missouri Tiger football player Jay Frye, the new IndyCar President of Competition and Operations says he wants to build on “lots of momentum” the series has seen in the last couple of years. FOXSports.com says he was “largely responsible” for healing a major rift between IndyCar and Phoenix International Raceway president Bryan Sperber stemming from negotiations that went badly in 2012.  “We as a series have to be smart about what we are doing,” Frye told Foxsports.com. “We have a great racing product. The racing is spectacular but we have to be smart to maintain costs and look at the program of the future, do certain things and help add value to the teams in other ways. I’m certain we can do it in a smart way going forward.”

(Formula 1)—Formula 1 runs its last race of the year on the Yas Marina Circuit in Abu Dhabi. The race could be the last time, for now at least, that cars with the historic Lotus badge will take the track in Formula 1. Lotus teams have been in financial jeopardy for most of the season and a deal for a takeover by Renault is expected to be finalized after the Abu Dhabi race. Renault had owned the team that competed under the Renault nameplate until getting out of Formula 1 as a constructor and selling the rights to a Luxembourg venture capital company that named the team after one of its partners, Group Lotus. Renault had announced in September it had signed a letter of intent to resume controlling interest in the team, which is under orders of a High Court in London to make the deal final before December 7th.

Previous Post: « Mizzou in Review: The highlights are slim in this loss to the Vols (VIDEO)
Next Post: Trooper says he’ll testify against Missouri in lawsuit over Iowa man’s drowning »