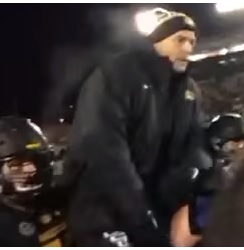 Missouri head football coach Gary Pinkel was carried off the field by senior lineman  Evan Boehm and Connor McGovern following the Tigers 19-8 loss to Tennessee.  This was Pinkel’s final home game as coach of the Tigers.  Missouri Governor Jay Nixon spoke with Pinkel before he stepped into the locker room, then joined Missourinet for a quick moment to share his thoughts on Pinkel.

As the players carried Pinkel off the field, Boehm said to his coach, “Sorry GP.”

Nixon called Pinkel “One of the good guys for all the right reasons.”