(NASCAR)—An unusual series of showers in Arizona has ended the hopes of Columbia NASCAR driver Carl Edwards to run for the championship in his first year with his new team.  Four other drivers will chase the championship next weekend at Homestead-Miami Speedway instead.

The start of the race had been delayed more than six hours because of earlier rain.  Dale Earnhardt, Jr., was in front when the red flag came out as cars sat in the pits.  Defending NASCAR champion Kevin Harvick was running second after leading 143 laps.

Earnhardt had failed to advance in earlier elimination rounds of the run-off but Harvick joins Jeff Gordon, Kyle Busch and Truex for the final shootout next Sunday.  The driver who has the best finish among those four will be crowned the champion. Edwards, Kurt Busch, Brad Keselowski, and Joey Logano are the four drivers that did not advance to the championship race. Kyle Busch is one of Edwards’ teammates with Joe Gibbs Racing.

The Phoenix track has hosted 38 top-tier NASCAR races. The only other time the race was shortened by rain was in 1998 with St. Louis driver Rusty Wallace in front.

Edwards had run among the leaders throughout the race and at one point had closed to within three points of Martin Truex, Jr., who was the last of the four drivers to advance.  He was running twelfth, two positions ahead of Truex, after the last round of pit stops when the race was called after 219 of the scheduled 312 laps when light rain became too heavy for the race to continue.

The field ran several laps under caution when rain began to fall lightly on the track.  “We can’t let it end like this,” Edwards told his crew on the radio.  But it did.  A few laps later the cars were pulled into pit lane and stopped while NASCAR sent track dryers onto the track.

“I hope so badly we can race,” Edwards told an interviewer in the pits. “I want to go racing.  We’ve got a great opportunity with traffic. We’ve got a great car.”   But heavier rain moved in and NASCAR announced as he was being interviewed that the race was ending.  Edwards dropped his umbrella and walked away in frustration to stand in the pits before picking up the umbrella again and walking away. 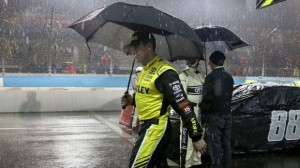 Unlike other sports that reduce teams eligible for their season championships through a series of playoffs and leave only the surviving teams to compete, all races still begin with 43 drivers who are eligible to win races, not just those that have reached the next bracket.

Rosberg started from the pole and led throughout the race.  Ferrari driver Sebastian Vettel finished behind the two Mercedes drivers.

(IndyCar)— Former Missouri Tiger football player Jay Frye has become the president of Competition and Operations for IndyCar.  Frye had been Chief Revenue Officer for Hulman Motorsports.  Before joining Hulman Motorsports, Frye had been with Red Bull Racing and MB2 Motorsports in NASCAR. His record shows his teams won four NASCAR Cup races.  Frye lettered as a defensive lineman for Woody Widenhofer’s 1986 Tiger team that went 3-8.

November 14th (Saturday) was a milestone day for the Hulman family, owners of the Indianapolis Motor Speedway.  It marked the seventieth anniversary of the day Anton “Tony” Hulman Jr., bought the track from Eddie Rickenbacker, best remembered as a World War I ace.  The track had fallen into disrepair while being shut down for World War II.  Hulman cleaned up the old track and made repairs in time to host the first post-war Indianapolis 500 on Memorial Day, 1946.  The 100th Indianapolis 500 will be run at the track next May.  The track is undergoing a huge overhaul of grandstands and other spectator areas.

IndyCar’s race through the streets of St. Petersburg, Florida will continue through 2020.  The city council has extended the license of the race organizers license until then.  Next year’s season opening race is scheduled for the weekend of March 11-13.  City economic development officials think the race has an economic impact of almost $50 million.

Previous Post: « Rams loss has to be pegged on Fisher. Is it time for a coaching change?
Next Post: Obama applauds protesters at University of Missouri, urges all parties to cooperate »