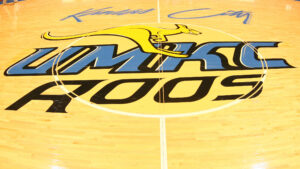 UMKC men’s basketball got off to a slow start on Monday night in its lone exhibition game, but the final 18 minutes proved to be the difference in a 72-61 win over Hawaii Pacific.

“I thought the guys were timid on both ends of the floor early. You could tell nerves were there,” Head Coach Kareem Richardson said. “A lot of turnovers, we had 12 turnovers in the first half alone. I really liked the way our guys competed in the second half though. That’s what’s great about exhibitions, and hopefully we continue to improve.”

The opening 11 minutes of the game was sloppy for both teams offensively, with UMKC holding a narrow 13-12 lead. That is when the Sharks started to take advantage of those Kansas City miscues though, pushing its lead to seven with 4:29 to play.

The ‘Roos got a three from sophomore forward Darius Austin to answer, but the Sharks stretched their lead to as many as nine on two occasions before the half, and led 32-23 at the break. They had a 13-5 advantage in points off turnovers, and held UMKC to only 36 percent shooting.

The Sharks quickly hit a pair of three-pointers to open the second period from Jordan Martin, but that is when the ‘Roos awakened on defense. They out-scored HPU by 26 the rest of the game, and forced the Sharks into several turnovers.

The ‘Roos pushed their lead to as many as 16 with 2:37 to play on a pair of LaVell Boyd free throws, and coasted to the win from there. The team out-scored HPU 15-5 in points off turnovers and 19-7 in second chance points, while tallying 22 points in the paint; all in the second half. UMKC also out-rebounded HPU by 12 in the final half, and held them to only 26 percent shooting.

UMKC was able to play 11 guys in the contest in both halves, and every one of those players got at least eight minutes.

Harrison led all scorers with 20 points and added four assists, while Austin tallied 15 points. Junior forward Kyle Steward led the way with eight rebounds, along with eight points. Nine different players scored as well, while Richardson improved to 3-0 in his career in exhibition games.

UMKC will open the regular season on Friday night at Minnesota, tipping off at the Williams Center at 8 p.m.

Previous Post: « Change of role at University of Missouri for Loftin comes after calls for his dismissal
Next Post: McCaskill applauds students for taking a stand on racial issues at Mizzou »