Did the guidelines for the Mizzou football player’s protest change from Saturday to Sunday?

It certainly appears that way if you read the statements that were released. We won’t have an opportunity to hear directly from Gary Pinkel and I’m assuming the players until later Monday afternoon at the scheduled media day.

On Saturday night a statement was released by Missouri’s Legion of Black Collegians. It read: 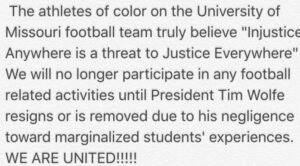 Gary Pinkel tweeted a photo Sunday morning, “The Mizzou Family stands as one. We are united. We are behind our players.” As players left that team meeting Sunday morning they said they could not or would not talk about the matter, but were looking forward to the opportunity.  Later Sunday morning, president Wolfe released a statement, and nowhere in that statement did it mention that he would step down.

Then late Sunday afternoon, early evening, a joint statement was released by the Athletic Department from AD Mack Rhoades and Pinkel It read :

“Today, Sunday, there will be no football practice or formal team activities. Our focus right now is on the health of Jonathan Butler, the concerns of our student-athletes and working with our community to address this serious issue. After meeting with the team this morning, it is clear they do not plan to return to practice until Jonathan resumes eating. We are continuing to have department, campus, and student meetings as we work through this issue and will provide further comment tomorrow afternoon.”

Something happened from Saturday evening to later Sunday afternoon to change the stance of the protest from the resignation or firing of president Wolfe to whether or not the grad student, who went on a hunger strike, will eat solid food.