(NASCAR)—Columbia driver Carl Edwards isn’t exactly in the win-or-else position as NASCAR heads to Phoenix for the 35th of this year’s 36 races, but he is fifth in the Chase point standings and only four drivers will move on to the Homestead-Miami Race on November 22 with a shot at the championship. 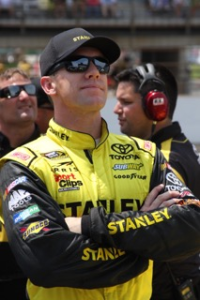 Edwards, who is looking up at Jeff Gordon, Kyle Busch, Kevin Harvick, and Martin Truex, Jr., finished fifth in the Texas 500 and is seven points behind Truex for the final spot in championship run at Homestead.  Although that seems to be a small margin, it actually is pretty big, given that there’s only one race left to overcome it in NASCAR’s scoring system.

Gordon is guaranteed a spot in the championship race because of his win at Martisville a week ago.  Edwards’ Joe Gibbs Racing teammate Kyle Busch is eleven points ahead of Edwards. Harvick leads him by ten. Harvick is the defending champion.

Edwards has a twelve-point advantage on former NASCAR champion Brad Keselowski, who led 312 of the 334 laps at Texas only to be passed by Jimmie Johnson with nine to go.   The win is the 75th of Johnson’s career, eighth on the all-time win list, one behind Dale Earnhardt, Sr.  Johnson is not eligible for a title shot at Homestead because he fell out of contention in the first round of the NASCAR playoff (or race-off) system.

Joplin’s Jamie McMurray ran in the top ten for much of the race and finished tenth.  Clint Bowyer was fifteenth.

If Edwards wins at Phoenix, he automatically will run for the championship at Homestead.  If Truex, Busch,  Harvick, or any of the drivers ranked 5-8 in the current run-off round win at Phoenix, they automatically qualify, leaving two spots in the final four to be determined by points, likely Edwards and two other non-winners in this round.

Statistically, how do they stack up?

Edwards has raced at Phoenix 22 times including the race last March when he finished 7th.  He won at Phoenix in 2010 and in 2013.  He has eleven top tens and seven to top-five finishes.  His average finish is 12.3.

Truex has an average finish of 17.1 in nineteen races. He has been in the top ten seven times and has one top-five.  No wins.

Harvick likes Phoenix. He has won four straight races there, five of the last six, and eight times overall.  He’s been in the top ten fourteen times and in the top five ten times in his 25 races.

Kyle Busch, who did not race at Phoenix last March because of his Daytona injuries, has averaged a 14.2 finish in twenty races, with a dozen top tens and three top fives. He has won there once.

Keselowski has not won any of the twelve races he has started at Phoenix but he has been in the top five four times and the top ten six times.

Keselowski, Kurt Busch, and Joey Logano need to win to advance.  If Edwards does not win, he needs to finish at least eight positions ahead of Truex, and must lead at least as many laps as Truex does.  If he and Truex tie in the points after Phoenix, Edwards advances because has won two races this year and Truex has won only once.

Edwards tied Tony Stewart for the points championship in 2011 but became the runner-up because Stewart had won more races.