(NASCAR)—Joplin driver Jamie McMurray charged toward the lead late in the race on the Martinsville half-mile track but couldn’t get close enough to make a move to take the win away from Jeff Gordon in the final laps.  Gordon won for the 93rd time in his career, ending a 39-race winless streak and qualifying to be one of four drivers to run for the NASCAR championship.  The win was an emotional one for Gordon, who will retire after four more races. He is bidding for his fifth championship. 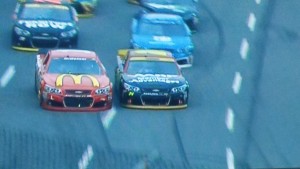 McMurray (on the left) was not able to pull ahead of Gordon on the last restart.  His runnerup finish equaled his best finish of the year. He also was second at Phoenix on March 15.  His last win was at Talladega in the fall of 2013.

Columbia’s Carl Edwards struggled all day and finished where he started—14th.  Edwards lost a lap early in the race when he was caught up in teammate Kyle Busch’s crash. He ran into the back of  A. J. Allmendinger’s car as Allmendinger slowed.  The shunt left Edwards with hood damage that forced a pit stop and put him a lap behind.  He got back onto the lead lap but could not threaten the contenders.  He was helped in the final finishing order when teammate Matt Kenseth, who was running 33rd, appeared to intentionally wreck race leader Joey Logano, taking Kurt Busch out of contention in the process.

Edwards’ mediocre finish leaves him fifth after the first race in the championship semi-finals.  Gordon and three other drivers  will transfer after upcoming races at Texas and Phoenix into the final race for the championship at Homestead-Miami.   He is nine points out of fourth, but seventeen up on Brad Keselowski, nineteen ahead of Busch and twenty-one ahead of Logano.

Edwards has nine top-ten finishes at the Texas Speedway, the next stop on the tour. He won a race there in 2013 and has finished second twice.

Clint Bowyer finished last, knocked out in a multi-car crash on the 185th of 500 laps.

(IndyCar)—IndyCar’s 2016 schedule will be longer, answering critics who have contended IndyCar leaves too much of the racing season to NASCAR.   The 16-race schedule features five races on oval tracks including the 100th running of the Indianapolis 500 on May 29th.  The season begins on March 15th on the street course in St. Petersburg, Florida.  The final race of the year will be September 18 on the road course at Sonoma, California.  Pocono is not on next year’s schedule.  A race through the streets of Boston has been added. The series returns to Road America, Wisconsin, where it last ran in 2007.

Officials say they hope the new schedule capitalizes on the 38 percent increase in television viewership during the last two years.

Two IndyCar drivers have set personal bests in the Ironman 70.3 Miami Triathalon.    Scott Dixon, this year’s series champion reached his goal of finishing the event in less than five hours by crossing the finish line in 4:50.25.  Dixon, who is 35, was competing in the 35-39 age bracket and was 154th out of more than 3,200 entrants.   Tony Kanaan, who is one of Dixon’s teammates for Chip Ganassi Racing, finished in five hours, eleven minutes.  Kanaan, who is 40, was in the 40-44 category.  The event included a 1.2-mile swim, a 56-mile bicycle ride, and a 13.1 mile run.

Previous Post: « Well, that didn’t last long. #Mizzou suspends Mauk for the remainder of the season
Next Post: Royals #TakeTheCrown by rallying to tie in the ninth and win in the 12th (VIDEO) »