You are here: Home / Sports / Backes scores his first two goals of the year as Blues beat Wild in OT 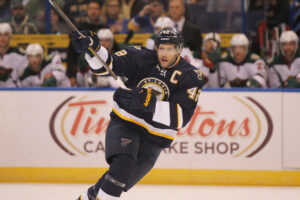 David Backes scored his first two goals of the season, including the game-winner in overtime with 33.6 seconds remaining to give the St. Louis Blues a 3-2 victory against the Minnesota Wild at Scottrade Center on Saturday.

Backes took a pass from Ty Rattie coming into the Minnesota zone and beat goalie Devan Dubnyk with a high wrist shot.

Jason Zucker and Erik Haula scored for the Wild (7-2-2) Dubnyk made 23 saves.