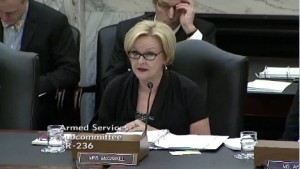 “Why is everyone not opening up these records and doing everything we can to get the word to these people. There are a lot of folks that were subjected to mustard gas experiments. The VA wants to point at you and I’m hitting a wall,” said McCaskill.

“They (DOD) are saying that even if I have the name of the veteran and the privacy waiver, they will not give me information out of your mustard gas database without a letter from the Chairman. I don’t know why this is so hard,” said McCaskill. “I really need a commitment from you all today that you will get me the information. Why is trying to help veterans who may have been exposed to mustard gas so hard? Would you all be willing to make that commitment that you will work with my office. They (DOD) just keep throwing up roadblocks. I’ve been at this for months.”

Carter said he was not aware of the issue but assured McCaskill that his office will honor her request.

Regulations were issued in the early 90s to compensate victims, but some say the VA has made the process difficult for veterans.