You are here: Home / Sports / Gomez scores his first goal as a member of the Blues. Allen gets shutout over the Bolts 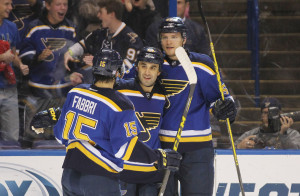 St. Louis Blues Scott Gomez (C) is congratulated by Robby Fabbri and Colton Parayko after scoring his first NHL goal, against the Tampa Bay Lightning in the first period at the Scottrade Center in St. Louis on October 27, 2015. Photo by Bill Greenblatt/UPI

Jake Allen made 26 saves, and Scott Gomez scored his first goal for the St. Louis Blues in a 2-0 win against the Tampa Bay Lightning at Scottrade Center on Tuesday.

Allen gets bragging rights over his friend Ben Bishop. The Blues prospects played together in Peoria during stints in the American Hockey League before Bishop, a St. Louis native, was traded in 2013.

Veteran Scott Gomez scored his first goal with the Blues. It came on a redirect of Colton Parayko’s wrist shot from the blue line at 15:59 of the first period.