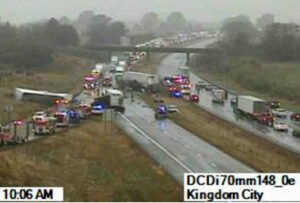 A caution to travelers on a rainy day that could see increased traffic to the World Series in Kansas City:

The Missouri  Highway Patrol is working a multi-vehicle accident on Eastbound I-70 in Central Missouri’s Callaway County at near exit 148.  Preliminary estimates by MODOT say east bound lanes could be closed for up to six  hours.  Delays are expected westbound as well.

Emergency officials are on the scene and officials have confirmed one person has died in the accident.

Eastbound motorists are being detoured around the area by taking Route J at exit 137, south to Route F, east to Route 54, and east to I-70. Meanwhile, eastbound motorists approaching the Columbia area in Boone County are advised to detour their route to U.S. Route 63 south to Jefferson City, then east on Route 54 and back to Interstate 70.