(NASCAR)–Columbia’s Carl Edwards has finished ahead of a multi-car crash on the last lap of the 500-mile race at Talladega and has moved on in NASCAR’s Chase for the Championship. Edwards crossed the finish line fifth in the race but second in the points in the three-race series that determined which eight drivers would remain in contention for the championship.

Joplin’s Jamie McMurray ran in the top ten for a good part of the race before losing an engine on the 182nd lap. He finished 39th.  Clint Bowyer wound up eighth after starting 29th.

Missouri had another prominent role in the race.  A B-2 Bomber from Whiteman Air Force Base did a flyover of the track during the National Anthem. 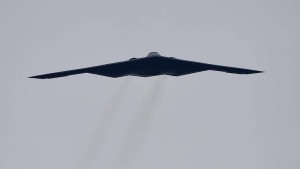 NASCAR’s version of a playoff system begins after 26 races when sixteen drivers who have won at least one race and a necessary number of drivers who have accumulated enough points become eligible for the Challenger Round of three races. The field is narrowed to the twelve for the Contender Round of drivers who either win one or more of the next three races or accumulate enough points to continue into the Eliminator Round, which features eight drivers based on wins and points. Joey Logano won all three races of the Eliminator Round.

Races in the next three weeks at Martinsville, Texas, and Phoenix will determine which four drivers reach the Championship Race, the season finale at Homestead-Miami.  The highest-finishing of those four drivers will be crowned the champion.

Edwards and Kyle Busch are the only members of the Joe Gibbs Racing stable still in the running.  Logano and Brad Keselowski will carry the Penskey Racing colors into the next round.  Jeff Gordon is the only one of the four Hendrick Motorsports drivers to make it this far.  Kurt Busch and Harvick represent Stewart-Hass Racing.  Martin Truex Jr., is the only driver from a single-car team to make the semifinal round of eight. He drives for Furniture Row, the only team not based in the east.  Furniture Row has its shops in Denver.

(FORMULA 1)—Lewis Hamilton has locked up the Formula 1 World Championship by winning the United States Grand Prix on the Circuit of the Americas in Texas.  Hamilton again finishing ahead of teammate Nico Rosberg, who was frustrated at the end of the race because he slid off-course with eight laps to go, giving Hamilton the chance to pull ahead.  Rosberg held off Sebastian Vettel for the runner-up spot.

The win is Hamilton’s tenth this year.  He’s the first F1 driver to win ten or more races in back-to-back seasons. He now has won the championship three times, 2008, 2014, and this year.  He is now tied with Sir Jackie Stewart for most F1 championships by a British driver.  Only four drivers have won more.

(FORMULA 1)—The condition of Michael Schumacher, who won more F1 titles than any other driver—seven—remains one of mystery as he continues an apparently slow recovery from a skiing accident more than a year and a half ago.  Schumacher suffered severe brain injuries when his head hit a rock on December 29, 2013.  He was kept in a medically-induced coma for two months.

(IndyCar)—IndyCar driver James Hinchcliffe has gotten back behind the wheel of a racing car for the first time since his near-fatal crash at the Indianapolis Motor Speedway in May that left him pinned in his car “like a shish kabob.”   Hinchcliffe writes for The Players Tribune that the crashed forced a metal suspension rod through lower right thigh and out through his upper left thigh, clipping an artery in the process and causing bleeding that almost killed him.

“I still don’t remember anything, and the whole thing still felt like it happened to somebody else,” he wrote. It took 133 days of surgeries, healing and rehabilitation before he was able to get back in racing car and run test laps at Road America, Wisconsin.  He admits his only fear before those laps was whether the crash had cause him to change.  “Like maybe I didn’t have it anymore, “he wrote. “There are a lot of good drivers, but it’s so difficult to find that last little bit that puts you on the same level as the top drivers in the world. That margin that separates the good from the great is so small, and I wondered if an experience as traumatic as what I went through would have any effect once I got back behind the wheel.”

Hinchcliffe admits it felt “kind of weird” to be back on the track but he started feeling comfortable after about five laps. A few laps later, he writes, he knew he could push the limits of the car.  That, he says, was when he realized “this thing is not trying to kill  you.”

You can read his comments at http://www.theplayerstribune.com/james-hinchcliffe-indycar-crash-return/