You are here: Home / Sports / Blues rally from two-goal deficit to gain a point, but loss in OT to Islanders 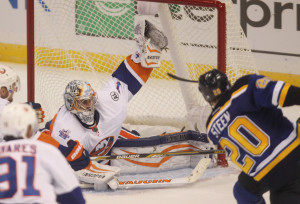 New York Islanders goaltender Thomas Greiss snags the puck off the stick of St. Louis Blues Alexander Steen during the overtime period at the Scotreade Center in St. Louis on October 24, 2015. New York won the game 3-2 in overtime. Photo by Bill Greenblatt/UPI

Mikhail Grabovski scored with 59.3 seconds remaining in overtime to give the New York Islanders a 3-2 victory against the St. Louis Blues at Scottrade Center on Saturday.

Alex Steen had a great chance to win it for the Blues, but was robbed by New York goalie Thomas Greiss who had to make 38 saves.  Steen scored in the third after the Blues (5-2-1) trailed 2-0, but also got a goal from Colton Parayko who had an assist on Steen’s goal.

Brian Elliott made 19 saves in his first loss in five games this season (4-0-1).