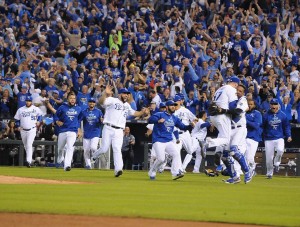 The Royals are headed back to the World Series after beating the Blue Jays 4-3 in Game Six of the American League Championship Series in Kansas City.

Lorenzo Cain scored from first for the go-ahead run on an eighth inning single by Eric Hosmer to propel the Royals.

Ben Zobrist and Mike Moustakas launched solo homers in the first and second, while Wade Davis earned the win with five outs of scoreless relief. Following a 41 minute rain delay in the eighth, Davis worked out of a jam in the ninth that saw the tying run on third base with no outs.

Alex Rios added an RBI-single for the Royals, while Yordano Ventura tossed five-and-a-third frames of one-run ball in a no-decision. 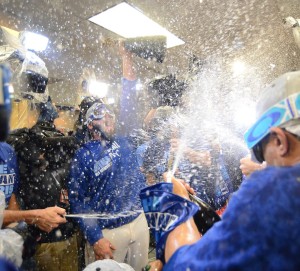 Royals shortstop Alcides Escobar was named MVP of the ALCS.

This is the fourth World Series appearance for KC, with the only win coming 30 years ago against the Cardinals. Jose Bautista was the story for the Blue Jays, as he drilled two homers in a losing effort. He belted a solo shot in the fourth before tying the game with a two-run dinger in the eighth. David Price gave up five hits and three runs in just under seven frames. Roberto Osuna took the loss after giving up Hosmer’s RBI. Toronto finished 0-for-12 with runners in scoring position.