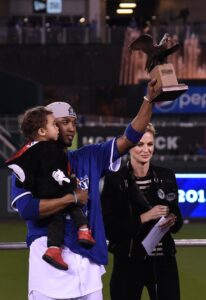 The 28-year-old native of Venezuela says he wasn’t expecting to win the honor.

Escobar went 11-for-23 in the series, scoring six runs and plating five. He recorded four hits and three runs in a losing effort in Game Three, and added four RBI in the Game Four blowout win. The shortstop also set a postseason record by recording a leadoff hit in the first four games of the series.