You are here: Home / Sports / Still plenty to play for as the Tigers prepare for their final five regular season games (AUDIO) 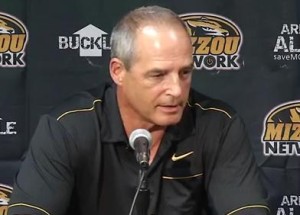 Mizzou head football coach Gary Pinkel put the remainder of this season in good perspective for me during his weekly press conference on Monday afternoon.  After Georgia kicked their field goal late in last Saturday’s game, I’m sure fans got that sinking feeling that a return trip to Atlanta for a third straight SEC Championship game was now lost.  A third loss in SEC play, title hopes shot, season a total loss.

Pinkel told the players on Sunday it’s time to refocus and look at their next set of goals.

The Tigers always have the ultimate goal of winning a national championship, starting with a conference championships.  Pinkel points out they were one game away, twice in the last eight years from playing for that goal.  There is more than just playing for a conference championship.  Now that is the focuse.  If players were only preoccupied with that goal, Pinkel points out that in a couple of weeks, there are going to be a lot of teams disappointed.

What is still out there?  With five games remaining, the Tigers need two wins to become bowl eligible.  That’s first and foremost, but the more of these final five the Tigers can win, the better the bowl game.  Missouri has played in bowl games in nine of the last ten years.  The Tigers have a three-game bowl win streak and are 6-3 in this current stretch.  That’s certainly better than a majority of teams can boast.

So while a trip to Atlanta in early December won’t happen, Coach Pinkel points out that once the regular season ends, only nine of the power five conference teams have something bigger to play for.  The automatic Big XII winning and the eight other qualifiers from the SEC, ACC, Big Ten and Pac 12 for their conference championship games.  That leaves a whole lot of teams out of that equation, but still much more for Mizzou to grab to turn this into a successful season.