(NASCAR)–Columbia NASCAR driver Carl Edwards considers the Kansas Speedway his home track and hungers for a win there.  But a trip to victory circle has  eluded him again.  Edwards’ eighth-place finish this weekend might give him a little breathing room, however,  heading into the uncertainty of next Sunday’s race at Talladega, a race where finishing positions can change radically in the last quarter-mile of the race o where hopes can suddenly be dashed in the annual “big one”—the multi-car crash that can be triggered by a slight bobble by one driver in the closely-packed field.

“For a win here, I can’t think of any possession I wouldn’t trade,” Edwards told reporters before the race.  He started on the outside pole, second-fastest in qualifying to Brad Keselowski.  Keselowski finished one place behind him, ninth.   Edwards now has eleven top ten finishes in his last fourteen races and sits fourth in points in the Chase for the Championship.  He’s a dozen points ahead of teammate Kyle Busch, who is ninth in the standings.  After next week’s Talladega race, only the top eight drivers will move into the round of eight semi-finalists for the championship. 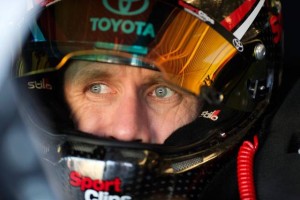 “If we could go out and win this championship, it’s a Cinderella story,” he said.   Edwards moved from Roush-Fenway Racing, where he started his NASCAR national series career, to Joe Gibbs Racing at the start of this year.  Gibbs created an entirely new team for Edwards, who struggled to meet his own expectations for the first part of the year.

Joplin’s Jamie McMurray struggled all day and finished twentieth, a lap down.  Part-time Missourian Clint Bowyer crashed hard into the wall on the 170 lap of the 269-lap race and finished fortieth.

Joey Logano won the race at the Kansas Speedway, his second consecutive victory and his fifth of the season after he and race leader Matt Kenseth touched bumpers, causing Kenseth to spin out.

Some fans of Dale Earnhardt Jr., have been calling for their guy to retaliate against Edwards, whom they blame for Earnhardt’s first crash last week at Charlotte but Earnhardt will have nothing to do with that talk.  In his weekly podcast before the Kansas race, Earnhardt told fans, “If I’m trying to wreck Carl, I’m not winning Kansas, I’m not winning Talladega.  You can’t go chase after a guy and put him out of a race and accomplish what your goals are.  Our goals are to go to those races and win, that’s what we’re good at.”

Edwards had been challenging Earnhardt for position at Charlotte when Earnhardt made a big move to block Edwards.  Two laps later, he tried it again and Edwards did not give ground, causing their cars to touch, sending Earnhardt into the wall.  Earnhardt got back in the race but hit some oil and went into the wall again.  He says the incident with Edwards was “both of our responsibility.”   As far as Earnhardt is concerned, “it’s over and done.”

Earnhardt had trouble all day at Kansas and finished 21st.

(FORMULA 1)—The Formula 1 circuit was quiet this weekend before the show moves to the Circuit of Americas near Austin, Texas for the United States Grant Prix.  Lewis Hamilton and Mercedes teammate Nico Rosberg finished 1-2 last year.

(IndyCar)—The remarkable story of two-time IndyCar champion Alex Zanardi has a new chapter.  Zanardi, who lost both of his legs in a racing crash in Germany in 2001, competed in the Ironman World Championship in Hawaii earlier this month and finished the three events—a 2.4 mile swim, a 112-mile bike ride, and a 26.2-mile run–seven minutes faster than he achieved last year.

Zanardi used a handbike for the cycling part of the event and an Olympic wheelchair for the running event.   He won a gold medal in the 2012 Paralympic Games in London.

Previous Post: « Chiefs and Vikings get into an ugly battle, and K.C. suffers fifth loss in a row
Next Post: Iran deal takes another step, but Missouri Republicans urge state opposition »